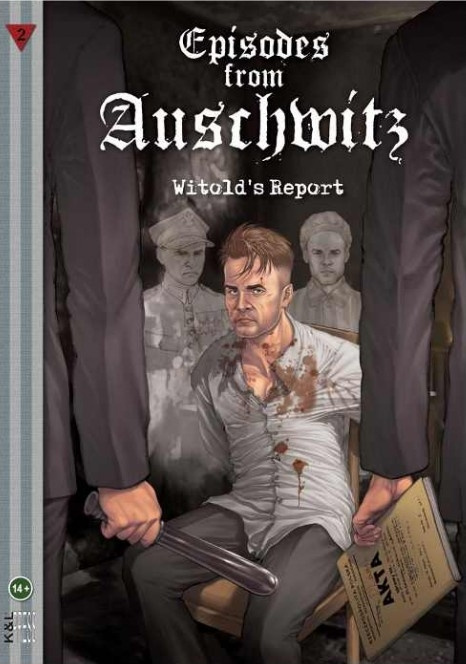 The next in the series of illustrated historical books about Auschwitz is dedicated to the story of Witold Pilecki — soldier of the Polish Army during the Polish-Soviet War in 1920 and September 1939 invasion of Poland, he fought in the Polish resistance, the AK (Home Army), and as its member, he volunteered for Auschwitz. After the war, the Communist regime considered him a traitor of the Polish People. He was murdered in the prison of the Ministry of Public Security of Poland in Mokotów, Warsaw. Pilecki's story is centered around his interrogation in the dungeons of the state secret police. The book presents the details of Pilecki's arrival in Auschwitz, his escape, and plans considered by the AK to attack the camp to free prisoners. Publisher: We return to the subject of Auschwitz using a new method and bearing in mind the contemporary Reader, who wants to expand their knowledge about concentration and death camps created by Nazi Germany in occupied Poland during the Second World War. The history of Auschwitz is presented by showing the fate of real people, showing them as they really were, their ups and downs, hopes and doubts in the nightmarish depravity of Auschwitz. Historical research works, essential in the understanding of history, are, in our opinion, not enough and often don't appeal to young readers. A straightforward illustrated historical book in an attractive graphical form, written in a lively way, offers the opportunity to better perceive the tragic events, and therefore to gain a more direct knowledge of the history. Education: The illustrated historical books are created in cooperation with historians specializing in concentration and extermination camps, military matters, and World War II. Work on the comic is accompanied by in-depth consultations with survivors, especially former prisoners of Auschwitz. The historical books "Episodes from Auschwitz" can be excellent educational materials for both teachers and students. Each book is 40 pages long. In addition to the dynamic color art work, the Reader will find an introduction that puts the presented events into historical context, an article by a researcher on the subject, a glossary of historical terms, and bibliography. Supplementary educational material with notes for teachers is aimed for use in the classroom. This material is available FREE OF CHARGE, downloadable from our website www.klpress.pl in PDF file format. The illustrated historical books can also be used to prepare young people for a visit to the Auschwitz-Birkenau Museum in Oświęcim, especially during topic-based visits - footsteps of the heroes whose destinies are presented in the following episodes in the series.