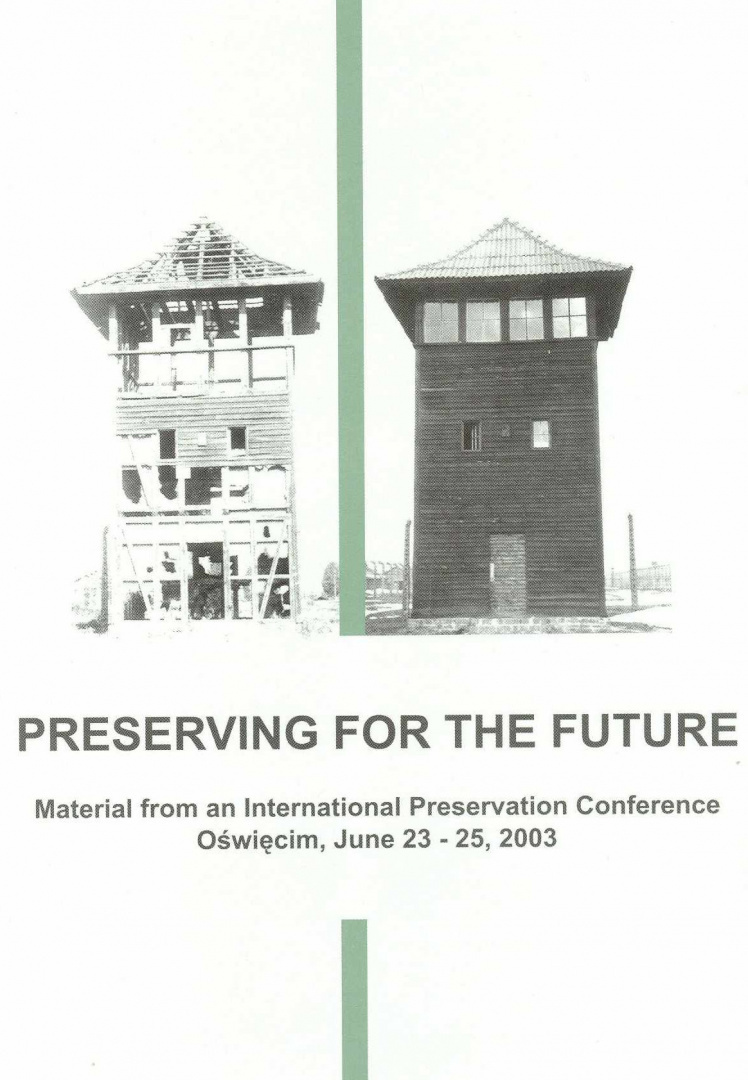 A collection of presentations and panel discussions from the Protecting For the Future international preservation conference, which was held at the Oświęcim Cultural Center from June 23-25, 2003. The conference was intended to give leading specialists a chance to discuss the preservation problems that the Museum deals with on an everyday basis: how to preserve the buildings and other objects at the site of the Nazi German concentration camp and extermination centre. Specialists from Poland and other countries spoke to the conference about completed projects and plans for the future. They all agreed on need to preserve the authentic remains of the Auschwitz camp. Michael Berenbaum formulated this idea most clearly in a talk that underlined the necessity of maintaining for future generations the Auschwitz heritage and the material evidence of the crimes committed there. Discussion themes at the conference included "The Limits of Intervention in Museum and Conservation Practice at the Auschwitz Memorial and Museum" (Bohdan Rymaszewski); "Using Modern Preservation Workshops to Protect the Collections of the Auschwitz-Birkenau Museum" (Alicja B. Strzelczyk); "Preservation and Ethical Dilemmas Associated with Conserving Auschwitz-Birkenau Victims' Hair" (Władysław Niessner); "Observations on Portable Museum Exhibits at the Auschwitz-Birkenau State Museum" (Friedemann Hellwig); "Ten Years of Preservation Work at the Auschwitz-Birkenau State Museum" (Witold Smrek); "The Contribution of the German Federal States to Preserving the Auschwitz Memorial" (Helmut Morlok); and "How to Preserve the Ruins of the Gas Chambers and Crematoria" (Andrzej Deneka). *** Beyond questions of morality, preservation problems at the Auschwitz-Birkenau State Museum in Oświęcim are associated with the extent of the grounds (over 190 hectares), the large number and variety of objects under preservation (154 buildings, 300 landmark ruins of barracks, gas chambers, crematoria and other buildings, 13,844 meters of fencing, thousands of personal effects and documents associated with the victims, such as clothing, shoes, suitcases, toothbrushes, glasses, prostheses, and camp documents), and unprecedented issues in the preservation of buildings and other objects. Not only new preservation methods, therefore, but also the knowledge and experience of the world's leading specialists are required. The publication is subsidized by the Ronald S. Lauder Foundation (USA)